On February 22, 2004, I decided that I wouldn’t spend any more weekends alone.

That January, I bought a condo an hour away from where my life was.  I grew up further north, went to school further south, and now found myself in an area where I knew no one.  My job was in an incredibly small office where I was the only one under 40 and single.  I remember spending evenings googling around for a group to join, but anything I found was for singles or athletes.  Nothing was out there JUST for the sake of making friends!  (I know, it is hard to imagine.  But this was 2004, the same year that Facebook was founded and Meetup.com was in its infancy.)  I didn’t want a date and definitely didn’t feel like running around, but I’d go crazy if I couldn’t find someone to talk to, to grab a drink with!

I decided to create New Jersey Young Professionals on a lark, using Yahoo Groups and hoping there were folks out there like me who could use some company.   I threw the group's URL on Craigslist under "Strictly Platonic".  Within a week I had 100 members and the rest, as they say, is history!  :)

Thank you to everyone who has joined in the past 10 years.

Thank you to those who were brave and attended their first event alone.

Thank you to anyone who welcomed new members and who told their friends about NJYP.

Thank you to my NJYP Team of hosts and leaders.

Thanks to all of you, I accomplished my goal and made more friends than I could ever have imagined.  All due to an organization that started with just one, lonely Member. 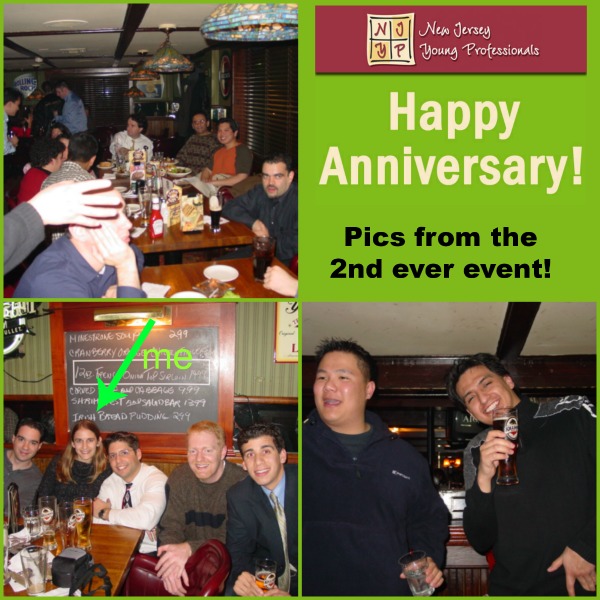 Thanks Pam, thanks Samah!

It was a lonely friday night, that brought me to google, and found your old site!  <3  thanks Laura for all your hard work and dedication to this group!

OMG, this is so inspiring.  I want to be like you Laura.

People have been asking so I'm going to publicly announce that YES, I will be at Friday's 10 Year Anniversary Party!